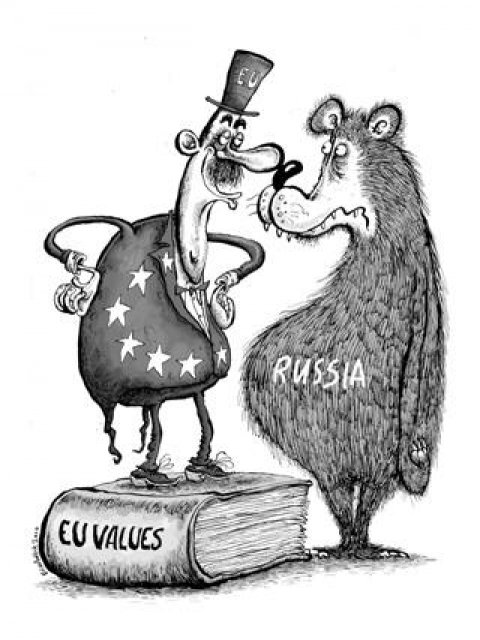 The EU still lacks a policy toward Russia, and history shows when core beliefs are compromised, disaster follows.

While Russia has always played a significant role in Europe, relations took a new dimension after European Union expansion. Not only because the EU’s border extended substantially eastward, but also because the 10 new member states have a unique relationship with Russia from a long and often forced coexistence. Now, Western Europe has access to expertise based not only on theoretical assumptions but practical experience. This advantage, if used properly, could benefit the entire EU and contribute to a sound and effective plan of cooperation with Russia.

The EU and Russia are predestined to have a close partnership. Both parties realize this but disagree on the term “partnership.” Russia considers the partnership to be primarily economic, while the EU would like to have a dialogue about values. Lately, there are more voices saying, “We must cooperate with Russia.”

But people forget there are two Russias. European politicians could separate them well during the Cold War era: They pragmatically maintained economic ties with the Brezhnev or Andropov regimes and, at the same time, politically and morally supported Soviet political prisoners and dissidents. Today, international support of Russian democrats and human rights campaigners is just as imperative as during the final decades of the Soviet Empire.

Russia has always been considered different and exceptional, operating by different rules from traditional European democracies. This notion of exceptionality strengthens existing elements of Russian foreign policy: isolationism and mistrust of international cooperation.

In contrast to the politics of international cooperation, which dominates the 21st century, Russia has returned to the power politics of the 19th century. We see this in the state’s targeted use of energy to exert political pressure. Kremlin aggression against Georgia was the state’s most brutal demonstration of power and Russia still occupies the Georgian territories of Abkhazia and South Ossetia.

At the same time, Russia’s declining population will hamper its ambitious modernization and economic diversification programs. Russian leadership knows the state’s current economic structure does not correspond with the developmental needs of a modern state, which is why, in 2008, the Russian government passed the Concept of Long-term Socioeconomic Development of the Russian Federation until 2020.

The plan is based on an almost Soviet conviction that state oversight of the economy is the best method to push development. This actually decreases Russia’s development potential, because innovation is closely linked to creativity and initiative. These things require personal freedom. Russia’s weakness as a “controlled” democracy, as Putin’s autocratic regime is often called, limits this personal freedom. In other words, the politics of Russian elites contradict their economic ambitions.

Last year, Europe celebrated the 20th anniversary of the fall of the Berlin Wall, an event that united free Europe with countries like Latvia and the Czech Republic, which were isolated behind the Iron Curtain. While many of these states are now EU and NATO members, the Baltic states in particular have not escaped from Russia’s sphere of influence. Moscow still longs to renew its special zone of interest, influence and security. Today, this is achieved by applying political pressure through threats of energy shortages, and some moves by EU member states lend indirect backing to these ideas. Russia does not hesitate to apply indirect and direct pressure – such as blockading energy supplies, making politically motivated investments or manipulating mass media – to achieve its goals.

Russia’s invasion of Georgia caused great concern. Latvian politicians asked NATO to immediately draft plans to defend the Baltic states. This plan still does not exist. After U.S. President Barack Obama’s decision to forego the missile defense system in Poland and the Czech Republic, the question of NATO defense guarantees and defense has become even more urgent.

It is especially important for the United States to maintain engagement in Central and Eastern Europe since Russian foreign policy is a playground for power politics. As Russia’s neighbor, Latvia welcomes renewed Russian-American relations and hopes that openness and cooperation between the United States and Russia grows. We expect, however, just as other countries in the region, that U.S and European powers to open a dialogue with Russia about Central and Eastern Europe. The ghost of the Yalta Conference still looms and fears that the region might not be a priority in U.S. foreign policy impelled us, 23 Central and Eastern European politicians and activists, to write a letter to the U.S. president. We appealed for President Obama to realize “the United States must repeatedly affirm its determination to be a European superpower and clearly prove its intention to engage in European affairs even when it faces more difficult challenges in Afghanistan, Pakistan, the Middle East and Asia.”

Energy plays a significant role in relations between Russia and Europe. Whether EU member states will agree on an efficient common energy policy is one of the biggest questions of the near future. Following the gas crisis in January 2006, the EU realized a common energy policy was strategically essential and began drafting one. The results have been modest, since some member states prefer to retain control of their energy sectors, and private energy firms continue to sign bilateral contracts with third countries. Moreover, the European Commission is not informed about these contracts, and no overview of the EU’s energy capacity exists. European vulnerability resurfaced during the gas crisis of January 2009.

In the meantime, Russia, which views efforts to create a common energy policy with great concern, is working to establish privileged bilateral relations with the biggest EU member states. The Nord Stream and South Stream gas pipelines, which have received almost all necessary permits, are a great strategic success as Russia has secured a direct connection with European partners while bypassing its closest neighbors. Until now, Russia could only launch short-term energy embargos since Western and Eastern Europe received gas though one pipeline. By cutting off supplies to its nearest neighbors, supplies were also cut off to Western Europe, significantly complicating any such decision. The new pipelines, which will largely solve the gas-supply problem in Western Europe, pose a hard blow to common EU energy policy because they decrease the need for member-state cooperation.

The Baltic states and Poland are especially concerned about the Nord Stream agreement, which paves the way for Russian gas to be piped beneath the North Sea directly into Germany. The Germans signed the deal without informing Central Europe or the Baltics, disregarding that this pipeline excludes our region from the European gas-supply network.

Let supporters of Nord Stream say what they want, let them tout the commercial character of the project, but the new pipelines redraw the old Iron Curtain line. Some Eastern European politicians compared the pipeline with the Ribbentrop-Molotov Pact – and rightfully so. The exclusion of Central and Eastern Europe from the EU’s energy supply structures weakens the region, and further fragments the EU.

Discussion about the postwar history of Europe is also contested within Russian-European relations. In comparison with Germany, which was de-Nazified after the war, the process of “de-Bolshevikization” in Russia was halted before it even began.

Russia acts with open hostility toward efforts by Central and Eastern European countries to find historical truth. Putin has emphasized on several occasions that Russia will not take responsibility for crimes committed by the Soviet Union in Central or Eastern Europe. At the same time, he has expressed his admiration for Stalin and his regret of “the largest geopolitical catastrophe of the 20th century”: the fall of the Soviet Union. More than one-fifth of the Russian population considers the NGO Memorial’s documented proof regarding the scale of Stalinist terror as untrue. It is with great justification that the Sakharov Award, given every year by the European Parliament, went to Memorial for fighting to condemn Stalin’s crimes and expose human rights violations in modern day Russia.

When assessing democracy’s current retreat in Russia – there is no other way to refer to the state’s control of the press, the narrowing of representative government, the lack of effort to critically re-evaluate Stalinism and Bolshevism, the war in Chechnya and other human rights abuses – we must realize that, given long-term EU interests, it is not possible to sacrifice values and succumb to the temptation of pragmatism. Whenever Europe has sacrificed basic values in the name of realpolitik, dramatic and tragic consequences have followed.